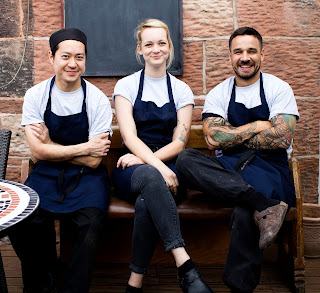 I’m really interested in the things we talk about when we share food, and that time we share when we sit down and eat and drink. I’m interested in community, how we fit into the world, how we measure ourselves against the world, and the fact this year seems a particularly political year.


I am also acutely aware that within popular media, there are still too few a space for women to have complex and in-depth conversation - the Bechdel test is still relevant to do today, with many films failing. Therefore, this is an interview column with women I find inspiring, and we sit down and eat and drink.


I recently meet with Emma Underwood, GM of Burnt Truffle in Haswell, for an earlier dinner. She was down in London to do Blood Shot at The Dairy with the Sticky Walnut crew. We spoke about how a restaurant can create a community, how people can still feel tribal about the space they have carved out for themselves. Both our PhDs had feminism theory as the main component and so we spoke about how we navigate ourselves within work spaces, as women, and how important it is to have such wonderful colleagues, bosses and inspiring people around us. And in a re-capp, I asked her my usual “Ladies that Lunch…” questions.


What does ‘success’ mean to you?
To me ‘success’ means achieving what you strive for, and in my case that’s simply being happy. I was set to follow an academic path from a very early age, which ended rather abruptly when I had to give up my PhD at the age of 25, so my own definition of success changed very quickly. ‘Success’ used to revolve around academic achievements: a good essay mark, an offer of publication, but now I tend to judge my ‘success’ upon personal happiness. Of course I want the restaurants to do well, and success within my career is vital, but doing well at work doesn’t always equate to personal happiness, which to me is essential.

What would be a political word, or concept, or philosophy do you want to know more about?
I was really fortunate that my PhD gave me the chance to research lots of small extreme left wing groups (it mostly focused on feminist theory within anarchist groups) so I was able to spend a couple of self-indulgent years exploring the fascinating worlds that these people built for themselves.

One group I found especially interesting was the Situationist International, who largely explored anti-consumerist theory through art. One of their theories was that all urban geography was ultimately capitalist, so instead proposed their own ‘psychogeography’, which encouraged people to ignore traditional pathways and roads centralised around capitalist tendencies, and create their own journeys instead. Apparently they would spend hours wandering around Paris with these principles. It’s so fascinating that you can perceive yourself as being radical simply by walking a different route, but it demonstrates the transformative power of political thought. I would really love the chance to explore this group further.

What is your understanding of community?
Community is simply the people that you surround yourself with, united by a common goal. I don’t think that communities are formed geographically anymore, but rather through interests and ideas. I grew up in a really small village that had an extremely strong sense of community, and I feel that same sense living in Heswall, but equally the restaurant community is very powerful.

We all live off our phones, especially in our busy lifestyles, but do you know any phone numbers off by heart still? If so, who’s?
I know Luke’s off by heart, not for any romantic reasons but because he will usually phone one of his suppliers with an order he has forgotten just as I am dropping off to sleep. I am well versed in both his phone number and the Wellocks Specials List as a result.

Thinking about a dish or a food from your childhood, what would be the one thing you would have now and would it live up to the stands of time, of being an adult?
My mum used to make this tuna pasta bake that I would go wild for. I’ve learned the hard way that it is shit when I made it in uni once. It’s one of those packet mixes that you add milk to, and has a remarkable lack of flavour to it.

When you are really hungry, what food do you think about?
Beans on toast, perfect comfort food.

What’s your favourite meal of the day?
Every night after work me and Luke sit and eat dinner together, no matter what time it is. We worked together at Sticky for two years, and spend far less time with each other since Burnt opened. It’s a really nice chance for us to sit and discuss the events of our respective days. Our career progression within the group has followed a really similar path, meaning that we have been able to offer one another valuable support and advice, the majority of which has been offered over a quick bowl of pasta on the sofa at midnight.

We both saw and wanted the smoked duck – what about that dishes did you like the sound of? Is there something if you see on menus, that you can’t go passed?
I love duck, and will usually go for poultry and game. I really like fresh flavours, so anything with cucumber and sweetcorn. I used to eat avocados every day until I realised they made me put on half a stone. I love spicy food too, I put sriracha on everything. I will honestly eat anything; I have a slight dairy intolerance but will happily eat cheese all day. It’s well worth it.

And lastly, what was your favourite meal from this week?


We’ve just had a ridiculous staff lunch which has to be the winner. We had Mark Poynton from Alimentum cook a guest evening at Burnt last night, so the boys decided to make some of the leftovers into a four course staff lunch today: scallops, duck, granita and battenburg. Lovely at the time but struggling to push myself into getting the restaurant set now!