May 19, 2020
I have been thinking a lot recently about how we decolonise our thinking, especially around food and drink and to be honest I have no answers but I do have a series of questions. I have a some specific streams of thinking.

I am also concerned with the indigenous identity, and how it is one that sits within many other spaces.
“Commonly held beliefs of the white culture attack commonly held bliefs of the Mexican culture, and both attack commonly held beliefs of the indigenous culture. […] she learns to be an Indian in Mexican culture, to be Mexican from an Angle point of view.” Gloria Anzaldua, Towards a new consciousness.
Because to me this is the essential strip back we need to get to, to understand what colonialism means, and how we untangle that. But how do we engage with that language in the UK where indigenous narratives is not a known language, because ‘native’ does not mean difference? How do we connect globally with the understanding of indigeneity?

There is the question of what do we / I mean by decolonising? For me, it is about the work of de-centring a white narrative. I use ‘white’ as an expression of a system of power, oppression and one with roots in violence. I feel weary with the term ‘white’ because it is binary and I want to move away from that language, but at present I can’t think of another term. I also note that in certain spaces the act of colonialism was done by working class ‘pioneers’ that often didn’t have much of a choice but to leave Europe for a promised new life, a New World.  Their presence in the new world was one of mass murder and violence – intentional or not – to indigenous people. So what is white, and how do we accurately talk about the varying levels of privilege when discussing history and its imprint on today? How do we incorporate the identity of ‘pioneer spirit’, which is one that has become a shortcut for innovative, trailblazing, hardworking that has also lead to progressive politics (e.g. NZ), without it erasing pre-pioneer ‘spirit/s’? 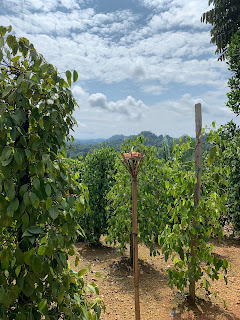 I keep coming back to the concept of land – the soil beneath our feet, the soil that nourishes us, the soil that is toiled on and that seeps into my cultural history, through stories my grandmother told me, to the ones I now tell. Where are the other stories of home that rest in soil?

I keep coming back to the concept of land because I have been re-reading Gloria Anzaldua, and her journey to understanding identity is linked to land – to being Texan, Mexican, Indigenous and borders that shift -
“The land was Mexican once
was Indian always
and is.
And will be again”.
Whose borders are we upholding?

I keep coming back to the concept of land...

Because I interviewed a barley farmer recently who spoke about terroir in malt, and the use of rotating crops and I want to know more. Why is terroir so widely spoken about in wine, but not in other drinks and yet all booze comes from something that has roots in the soil?

Because I have spent time with three different pepper farmers in Sarawak, wrote three different articles, in three years and each of their stories of pepper and farming is different. How many stories are we forgetting, with each of our essential cooking ingredient?

Because the question of the future of food has lead me to interview NASA plant scientists, urban farming technology makers in Texas and the UK, a nutritionist in Hong Kong, a Chinese American farmer in California. What do we want our soil to look like in 50 or 100 years, and what do we want it to grow?

Because when I write about the history of spice I picture the Banda Islands – the sale of which, from the English to the Dutch, had the birth of New York as it’s consequence – and the only way to illustrate the story of those islands is to picture the land red, drenched in blood. Whose bones do we walk over when we walk through fields?

Because I read an article in Pit Magazine by Adrian Miller on African American women’s dominant, but often forgotten, place in barbecue history. This is linked to indigenous cooking methods and how enslaved Africans were forced to cook for large gatherings. A story is told about a celebrated woman in the US in 1930s “Aunt Dinah dug a hole in the ground and cooked meats on burned charcoal smothered over with earth.” It reminded me of the Māori hāngī, the tradition of cooking food in the earth. Who else uses the land to not only grow but to cook and to celebrate, and what stories are we missing about techniques that differ from a European norm?

I keep coming back to the concept of land because the language around food, and sustainability, is laced in words like provenance, farm to fork, seasonal and yet the main voices I hear are white - Alice Walters, Dan Barber, René Redzepi. Where are the voices of my indigenous brothers and sisters whose whole being is linked to the land, whose understanding of cycles, provenance, soil to mouth and the waxing and waning of seasons is imbedded in their bones, and whose voices are erased from this conversation? Or worse, capitalised and appropriated?

Across the globe land was taken because Europeans had a concept of space that was about ownership, that involved fences and segregation. Because many indigenous cultures did not see land like this their presence was erased, the land was seen as empty and for the taking.

Land was empty of meaning to colonialists; the soil that nourishes spirits and beings, was only important to create boarders on and have goods to be capitalised.

Land is always about journey.
Many indigenous cultures move/d through, rotated crops, let land rest, came back, moved on. Europeans moved East in warships for poppies, sailed South as self-appointed pilgrims, traversed West in wagons with seeds of a new agriculture.

Whose journeys do we prioritise across the land?
How do I untangle my history, wrapped in both pioneer and indigenous spirit?
How do I decolonise me?

Two poems about the land, and colonialism
Dreams - about sitting on a river bank
Did they think of me? - about becoming 'British'