April 20, 2020
My mother cooks curry in a sarong and shower cap.
My mother has both my daughters.
My mother is strong, caring, violent and beautiful.
My mother makes the best ice cream. 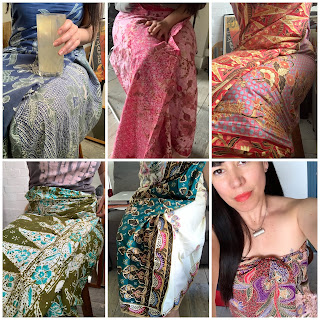 Last week I wore a different sarong every day, well except for Friday as that was shopping day so I put on ‘proper’ clothes to go into public. I love my sarongs, every time I go home to Sarawak (the Malaysian state I am from) I buy a new sarong, most of the time I use the excuse of buying one for a friend, but often I also get a new one for me.

Sarongs mean home, in so many ways. They are what I wear in the evenings in Sarawak, after my shower, before dinner; I put on a sarong and have a beer with dad or a pre-dinner snack, sitting on the veranda. In London they are what I potter about the house in. And are for me, inexplicitly linked with cooking.

During my PhD I worked with four women, all performers, PhD was particular practice-based and involved performances. One of the sessions we looked at idea of mothers. I wanted to unpick the meaning of mothering, to explore the ideas of ‘bad mothers’ and the expectations of what we had around being a mother.

The relationship between food and mothering was how I chose to explore ideas ideas of home and belonging, because the job is often the responsibility of women, especially within migrant communities – feeding is the work of aunties, older sisters and mothers. Food is a way to build a sense of belonging in a new space, coating the air, your mouth, your memories in familiarity. Also, nostalgia and memory get intertwined with food and the idea of our mothers.

Memories of food and of our mothers are often reduced to static images – which can be harmful, but is an act that gets utilised to create safety. Below is an edited quote from my PhD that explores this (bilek is the home space of an Iban longhouse):

In the bilek the fire is burning, faint sounds of children sleeping, the smell of food cooking; this is the space of home, permeating through memories, stable, consistent and familiar. The shadowy figure of mother always present in the imagined place of home, permanently positioned within the space of nostalgia, perpetually stuck in one timeframe.

It is with this sensibility of the bilek that I am viewing the idea of home and linking it with the idea of ‘mother’. Throughout this project I looked at the voice of ‘mother’ because an idea of mother - that I have utilised - can be of home and origin. This ‘mother’, within my performances, was often represented through a disembodied voice

This positions the ‘mother’ as a place of origin, which in the diaspora space is a disembodied and imagined place. The space of home is one that gets defined in opposition to the diaspora (present) space, ‘diaspora refers to a “dispersion from”. Hence the word embodies a notion of a centre, a locus, a “home” from where the dispersion occurs’ (Brah 1996:181). Home and mother become a place of origin, a place of stability to move out and away from.

This idea of home gets utilised within postcolonial spaces; it gets used to define a nation, evoking a stable, static past. The fixing of the identity of places is a matter always of power and contestation rather than of actually existing authenticity… “the past was no more static that the present”’ (Massey 2005:123).
[…]
The nostalgic motherland is created, looking back at a time before colonialism, when things were ‘good’, were theirs: ‘nationalism is an important and dangerous manifestation of this temptation, in romanticizing “homeland”’ (Young 2005:150).

Home becomes a place that is static in time and space, in opposition to the forward moving diaspora space. But this created place of origin is limiting and ultimately disappointing because it is neither static nor perfect. The act of migrating and leaving ‘home’ is linked with moving forward in opposition to ‘going back home’ (Massey 2005:124), which not only places the ‘mother’ as static, but also backwards, the past and the familiar.
[…]
But what happens when you go home and your ‘mother’ is not there. Is it because she was never there in the first place? The disappointment of the mother/home not being the place you remember makes unstable the diaspora spaces you have ventured into.

Through exploring images we had of our mothers, of people who mothered us, we found a tangle of contradictions. Of people who fed us, who harmed us, who protected us and who challenged us – mothers who could cook many things and refused to be one identity. Through complicating this idea of mother, we can get to untangle ideas of home and we can to tell different stories of who we are in a new space.

Catriona James, one of the women performers, said ‘my mother cooks curry in a sarong and a shower cap, so that the smell of the curry doesn’t linger on her.” There is so much in this one sentence; the idea of food making a permanent and physical presence, and the desire for it not to be. This is specifically meaningful as a migrant, where taking up space is often challenged, and the smell of food is a way to be bullied and othered.

But it is also a moment of care, of wanting to have a cooking space and identity and being able to step away from that space and be a different – non curry scented person. To be something more than a mother cooking for her family.

This sentence from Catriona reminded me that I too cook in a sarong. I don’t cook that often, but when I do, I put on a sarong and take pleasure in the task. And now, I sometimes wear a shower cap too.

Sarongs are home to me because they are my private life, my cooking space, where I get to be glamourous (I mean, look at my sarongs, they are so glam!) and comfortable. Last week I cooked more than I have all lockdown, in my sarong I felt at home in the kitchen and brave enough to experiment with cooking. I am not a mother, but I do have people and animals that I have to look after. I don’t want to be static or uncomplicated. I want my home of Malaysia to be present in my home of London – I want my sarongs to be seen.

The intro sentences can be read as four different voices / women, or one person. The unpicking of nostalgia, and the complicating of women’s identity is something I am very interested in. I think to look at identity, and to investigate the intersections of race, gender and power we need to be comfortable in complication, we need to complicate and not simplify.

I have written about nostalgia and food elsewhere, most recently for Crust Magazine, Cooking Home & Complicating Nostalgia. Some of this is the same as above, as it is riffing off my PhD work 